What is servitization? How does it affect manufacturers? We’ve produced a white paper to demystify the subject of servitization. For those on the go, here’s the TL;DR.

Servitization is the concept that any product / offering, can be delivered ‘as a service’ (e.g. by the hour or unit) rather than as a discrete product + maintenance combination.

Machines that perform a specific function (e.g. welding, blowing, moving) can be sold as a guarantee of the service that they provide, rather than the machine itself and a large maintenance package. For example, welding-robots can be sold as a subscription of ‘welds per hour’ and aircraft can be sold as ‘flight-hours per month’.

A classic example of this is Rolls-Royce in the 80s shifting its business to a ‘Power by the Hour’ model where no longer would they simply sell jet engines and warranties, they would instead offer the operator flight-hours – the responsibility would then be entirely on Rolls Royce to deliver the contracted number of hours whilst achieving certain availability metrics.

Other sectors such as agriculture and transport have also enjoyed success with servitization from tractors to trains, and today there is enormous potential to roll out similar arrangements across other industries.

What’s more, many businesses in other sectors may be more familiar with servitization than they realize, having already adopted a similar approach when it comes to outsourcing peripheral activities, such as cleaning or building services.

In essence, servitization simply extends that model to include functions that are central to the core business. For instance, equipment suppliers sell the benefits of their machinery - the capacity they deliver - as a service, rather than simply selling the machine itself.

Whilst it does shift risk of performance onto the supplier, everybody benefits. Servitization focuses the mindset of the industry on performance and delivered capability, the potential savings in time and  money for those choosing servitization are huge.

Servitization essentially allows you to get closer with your customer, in a more positive manner than the oft-antagonistic relationship usually in play:

Every time your customer has unplanned downtime caused by your equipment, they’ll be in contact to be asking you to fix it (possibly not very politely) – even if you cover the repair with a service agreement which they’ve taken out and the fault is repaired quickly, you customers won’t be pleased with the fact that your company has supplied something which has caused loss of revenue, quality and reputation through unplanned downtime.

For end users servitization promises to reduce the risk of investing in new equipment, as well as increasing efficiency and slashing downtime. For the equipment supplier servitization improves relationships with end-user customers and increases transparency around how equipment is performing in the field.

What does this mean for industry?

Delivering servitization effectively requires a two-way flow of data and information throughout the supply chain, supported by scalable condition monitoring so that equipment suppliers can monitor the performance of their assets remotely and predict when maintenance is needed. This means resources are not wasted (maintenance effort and spares) on maintaining assets that could continue running without a hitch for the next few months. Ultimately, of course, everyone benefits by not being left to deal with unplanned shutdowns.

True predictive maintenance has been tricky to achieve until quite recently, since it traditionally demanded huge amounts of time and expertise from data specialists to spot when problems were about to occur. That is now changing thanks to the arrival of intelligent software products such as Senseye, which leverages the economies of scale of cloud computing and advanced machine learning algorithms to automate the entire process. 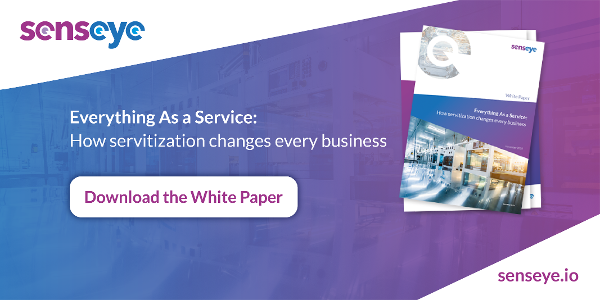