The evolution of AI: From movie screens to reality

Artificial intelligence (AI) has been the subject of science fiction writers’ imaginations for hundreds of years. It is clear that Robert Heinlein’s 1966 predictions of life at the end of the twentieth century such as interplanetary travel waiting at the front door, intelligent life being found on Mars, and cancer, the common cold and tooth decay being eradicated, haven’t come to reality. But, as Alexa can tell you, technology has nevertheless propelled AI out of the imagination and into reality. Autonomous cars, fraud detection, smart motorways managing traffic; these all use AI to automate what has historically been done manually by humans.

“Yes, people will be out of work, but by then there'll be no work left to be done. Everything will be done by living machines. People will do only what they enjoy. They will live only to perfect themselves.”

“Turing had pointed out that, if one could carry out a prolonged conversation with a machine—whether by typewriter or microphones was immaterial—without being able to distinguish between its replies and those that a man might give, then the machine was thinking, by any sensible definition of the word. Hal could pass the Turing test with ease.”

1999: The Matrix – Wachowski Sisters (formerly known as the Wachowski Brothers)

“What is the Matrix? Control. The Matrix is a computer-generated dream world built to keep us under control in order to change a human being into this.”

“One day the AIs are going to look back on us the same way we look at fossil skeletons on the plains of Africa; an upright ape living in dust with crude language and tools all set for extinction.”

The use of AI has been enabled by technology-rich foundations, namely:

All of these developments have come together to support AI development, making it a valuable workplace tool enabling revenue growth, cost advantage and changing competitive advantage for industry.

Even the prestigious Wimbledon tennis championships have increasingly embraced AI. During its 2019 championships, analysis of players’ gestures and reactions combined with types of crowd noise such as gasps and cheers, was used to select video highlights for the editing teams. Not only has this saved a lot of time, it has given greater prominence to lower-ranked matches that might otherwise have been overlooked. This collaborative working approach was examined in the Harvard Business Review:

“In our research involving 1,500 companies, we found that firms achieve the most significant performance improvements when humans and machines work together. Through such collaborative intelligence, humans and AI actively enhance each other’s complementary strengths: the leadership, teamwork, creativity, and social skills of the former, and the speed, scalability, and quantitative capabilities of the latter.”

Looking ahead, the next stage of AI is artificial general intelligence (AGI), where its ability to mimic human intelligence and/or behavior equals that of a human. It covers more than one field like power of reasoning, problem solving and abstract thinking, which is mostly on par with adults. Most experts believe AGI is possible however, it is yet to be demonstrated to great effect.

The third and final stage of AI is artificial super intelligence (ASI), where AI exceeds human intelligence in all areas. Machines are unquestionably faster than humans at complex data modelling, but humans are (currently) better equipped with people skills, creativity and humour. ASI is not a current reality and many argue that it never will be.

The evolution of AI

If the world of science fiction is to be believed, AI could ultimately be the downfall of the human race as we know it (unless you’re a WALL-E fan). But today, in the real world, AI’s role is to complement and enhance human capabilities rather than surpass them.

Read our white paper on how AI can be used to support Predictive Maintenance, and the importance of AI/Human collaboration. 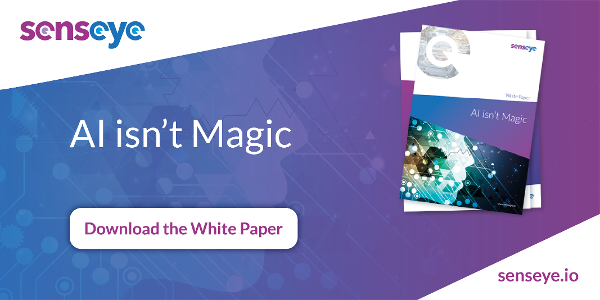